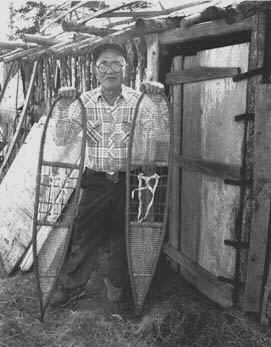 ...The night before they had boiled caribou hooves for broth.  Next day, they were down to a spoonful of caribou brains.

And then the cold became much colder.

After awhile Nahnaa passed away, explained Kenneth for his father who had grown silent.  Johnny Frank and a then nine-year-old Hamel went from the tent to the cabin, pulling up parts of the floor from which to make a coffin.  His mother dug out a little hole and they buried him.  Then they covered the grave with rocks to keep the animals away.

Several days later Hamel recalled that his older brothers, Nathaniel and Elaa, lashed on their snowshoes and sought help at Christian Village, some 30 miles away.  They took with them one blanket and the hind leg of a porcupine. Their timing was just right, and that, according to Hamel was luck, because in those days people were scattered and could have been out hunting or trapping.  But Jim Christian, Ambrose William and Moses Sam were there, and for Nathaniel and Elaa that was even more good  luck.

During the winter, the three young men had been camping over by Tt’oo tthoo van (Brown Grass Lake), and next day, they returned for some of the food they had cached. They stayed the night and in the morning, they hitched up their dogs, put a little food in their toboggan and returned to Christian Village.  Nathaniel and Elaa then snowshoed back to Ch'at'oonjik (Crow Nest River), taking with them what little food could be spared...

Hamel explained that that summer they stayed in Arctic Village. But later that fall they went to Big Rock Mountain [just north of Gold Camp] and with the help of Arctic Village residents, they built a cabin.  Here, they waited for the caribou, which soon began their return from the north.

“Then the caribou were going back south there were so many,” exclaimed Hamel. “At first, we just watched the caribou migrating.

“That was a better year!  That year,” smiled Hamel, “there were lots of caribou trails...”